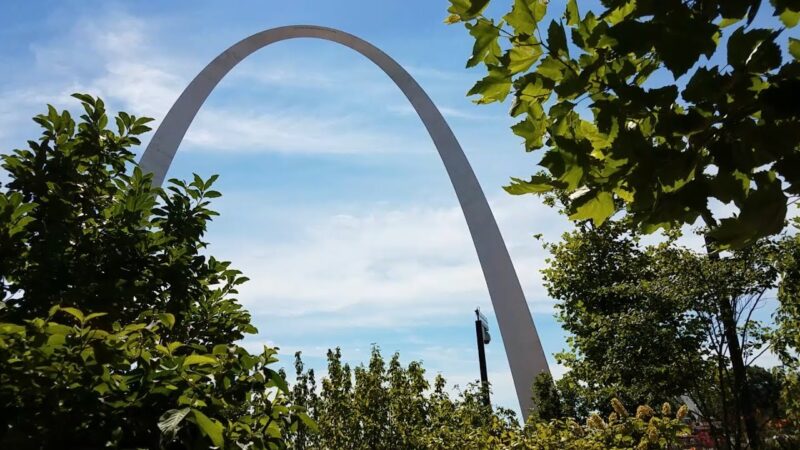 The Gateway Arch in St. Louis, MO is a monument to the westward expansion of the United States. At 630 feet, it’s the tallest memorial in the country.

Since its founding in 1764, St. Louis, MO has been a staging area for the westward expansion of the US. Located near the confluence of the Missouri and Mississippi rivers, early pioneers, explorers, and fur traders stocked up on supplies in St. Louis before heading west. This history made St. Louis a logical site for a monument to commemorate the spirit and courage of these hearty souls.

A Monument to Westward Expansion

The winner of a nation-wide competition, Eero Saarinen designed what would become the Gateway Arch. Resembling an inverted catenary curve, Saarinen hung chains of various lengths from the ceiling of his basement and adjusted their base widths and vertical axis until he found a shape that was pleasing to the eye. Sadly, he would only see his vision completed in his mind and on the drawing board. A brain tumor claimed his life before construction began in 1962.

The structure would be triangular in section and hollow, with a skin of stainless steel. The equilateral triangle sections would be 54 feet wide at the base and 17 feet wide at the top. A tram system would transport tourists to an observation chamber at the top where 32 windows would allow sightseers a view of up to thirty miles.

The Rise of a Historical Structure

The Arch would weigh 43,000 tons, so before it could go up, workers had to go down to bedrock. They found it 30 feet below ground level and blasted into the rock another 30 feet deep. From this level, the concrete footings would be poured.

142 triangular sections would comprise the structure, and the first was put in place in February of 1963.

Cranes had the capacity to lift the sections to a height of 72 feet. After this point, creeper derricks would scale each leg on vertical tracks which were secured to the outer walls of each leg. During construction, tolerances were exacting. Any error in measurement at the bottom would be magnified by the height of the monument. Measurements were taken at night when solar deflection would be minimized. The margin for error could be no more than 1/64th of an inch. When tolerance checked out, another section would be raised into place and welded to the growing legs. Slowly, the structure began to take shape.

In June of 1965, with the height at 548 feet, a stabilizing strut was installed. It spanned the legs and prevented the legs from collapsing toward each other.

On October 28, 1965, only a single section of the arch remained to be put into place. This final section was 8 feet wide, but due to expansion caused by the sun’s heat, the gap between the legs was only thirty inches. The two legs had to be pried apart by 450 tons of hydraulic force until the gap would accept the last section. The 142nd section would fit “like a key in a lock,” and St. Louis had their most popular tourist attraction since the Clydesdale’s.

More than 6000 tourists can go to the observation chamber in a single day, while thousands of others will go no higher than the underground museum between the two legs. Regardless of one’s vantage point, the Gateway Arch is a sight to behold and a fitting tribute to all those who would follow the setting sun. 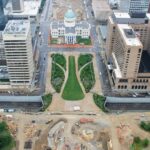 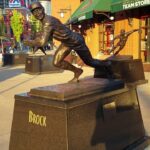